I love being outside, and fortunately my son seems to share that.  Naturally, I’ve been dying to take him camping.  So off the two of us went, in search of a mini adventure.

I got a little over zealous, thinking we might head towards Colorado.  Then I remembered that I wanted to go camping, not driving.  Nursing a six month old was going to extend that drive so much that it wasn’t worth it for the amount of time we had.  I determined that I would spend more time in convenience stores than the mountains.  As much as I love peach rings and testing out new sunglasses, that seemed counter to the idea.  So we headed East rather than West. First, let me say that the website for Missouri State Parks is just about the most well put together easily navigable site that there is for finding what you want out of a campsite.  I am now set for all sorts of adventuring to come.

I chose Cuivre River because I had never been there before, there was a small lake, and there were lots of different options for hiking trails.  Jules and I were also able to stop in Columbia each way to see his Aunts, which helped break up the drive.

This was the first time that Jules went camping.    Taking a six month old camping by myself seems like an easy and natural decision.  In speaking to people, I realize that this is not typically considered a relaxing or normal idea.  This is something that I have come to realize throughout my transition into all that is motherhood, particularly as I remained active throughout my pregnancy.  It isn’t too difficult to find stories of moms who are elites, doing things that are more impressive than I can begin to dare.  There is not however, a lot of anecdotal information for moms out there who are enthusiasts in their respective activities.  I my friends, am an enthusiast, in search of a little adventure.

Cuivre River has a great collection of little hiking trails.  I’m starting to look at trail lists a little differently.  Primarily a trail runner, I typically look for longer trails.  Hiking with a child on your back takes a bit more time than freely romping through the woods.  I want a variety of shorter trails.  This way I can explore new areas, but can also take breaks easily.  Even if I’m prepared to keep going, that doesn’t mean that the baby is.  There’s no guarantee that there will be easy places to stop and hang out with Jules outside of the pack on a trail, so for now, shorter works well.  I typically don’t hike more than five miles at a time with him right now.  The visitor center at the park has color coded trail maps available, and all of the trails that I hiked were really well blazed.

The first day we set up camp, and then hiked around all of the little trails near the campgrounds. There are a lot of packs available for hiking with kiddos, but I love our Osprey.  Seriously, I could wax rhapsodic about it for far too long. It’s comfortable, easily adjustable between people, lots of storage (we have the poco premium), comes with a sun shade and a padded changing pad. It’s amazing.  After hiking, we went and hung out by the lake for a little while.  It was the first time Jules had experienced sand, which of course went straight for his mouth.

We hung out for a while around the campsite before calling at a night, where I even managed to make and eat a hot dinner. Rather than attempt to build a fire I used a little backpacking stove.  Couscous is super easy, and I just add premade meals, like Tikka Masala to it.  I keep a picnic blanket that’s a little thicker and water resistant in the car.  It’s great for the babe to hang out on while I do things like cook.  He pretty much spends his time on there ignoring anything that I hand him in order to get to the rocks and sticks.  “Don’t eat the daddy long legs.”  I’m not even sure how he got that.

The next day we hiked around the lake and a little offshoot trail.  We spent some time in the sand and the lake. We ended up packing up that late afternoon and heading back.  We planned to stay an extra night, but there was rain in the forecast.  It rained a lot through the night and the next day.  Trying to pack up in that would not have been as fun for our first go so I think we made the right choice.

It was a really special little trip.  The terrain was more meadow than I expected with beautiful wild flowers.  Jules got to spend plenty of time wild and naked (his preferred attire).  We got in lots of hiking.  Because it was warmer than expected we were able to get in the lake. It was perfect.

Momming it so hard. 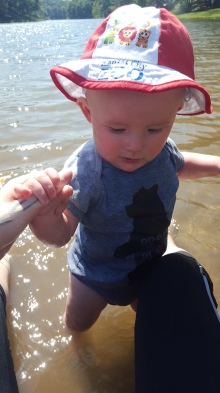