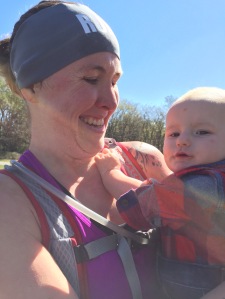 I signed up for this race while I was still pregnant.  It was a tad ambitious I suppose, a 50k just before Jules would turn 7 months old, but I wanted to prove to myself that I could keep up with my running even after a baby.  So I needed a goal.  This was my second postpartum race.  (I had done a half in June.)

At race start I was feeling a bit ill prepared.   I’d really struggled with my training throughout September.  I’d been feeling really anxious in general, and it was coming out in my runs.  I worried about keeping up with people, or guilt about taking time for a long run would turn to anxiety.  I worried unnecessarily about pace until I felt so anxious it would slow me down.  This is not new to me, it’s something that I’ve struggled with periodically.

At race start, a lot of those anxious feelings popped up.  I wanted to start conservatively enough that I wouldn’t blow my legs out on the first loop (of a 2 loop course).  Was I going too fast, too slow?  Would something go wrong, and I’d drop to the 25k?  These are pretty normal thoughts, but for me, I can allow them to become almost debilitating.  I will feel my chest tighten up and have incredible trouble clearing my head.

I ran like that for the first several miles, trying all that I could to stay positive.  I made the best choice by going out with friends.  A few miles in I was able to chat more with my friend Amy, which was a perfect distraction from the noise in my brain.  Rockbridge is a very runnable course, especially compared to the trails I’m used to.  It’s not terribly technical, so I was able to get into a groove and run pretty steadily.  By mile six, something started to click.

I do not like running in the summer.  I struggle in the heat mentally as much as physically.  This was the first truly cool day I’d been able to run in quite a while.  The night before my husband has asked me what time he should try to meet me between loops.  I said if I was really on, I’d be there in three hours.  He should show up then, but be prepared to wait a bit.  I started to enjoy the cool air more and more and gradually picked up my pace.  I made it through my first loop in 3:02.

My husband was there with our son, and his sister Deb.  To make the logistics of the race easier I planned to breastfeed between loops.  That was one of the most privileged experiences I’ve had.  I felt so supported and fortunate to be able to share that race with family.  I took about 15-17ish minutes at that aid station to breastfeed while my husband Nathan refilled water and food.  Then I went back out for loop two.

I started the first group with friends, but the second I was out alone.  It was several miles before I caught back up to anyone.  It gave me some time to have fun running.  Something that I had been missing a bit.  Gradually I began to pass some people, and eventually caught back up to Amy.  We leapfrogged back and forth for a while, getting to talk a little more.  The race has a small portion that you run both directions.  It timed out so that I was able to see almost everyone that I knew running the 25k heading the other direction.  It was so much fun to continually see people I knew out there.  It was a race full of friends.

I got to where I had less than five miles to go and I glanced at the time.  I had been running by feel, making a point of not looking at my watch.  I realized that I could get in in under 6:30 if I could maintain what I was doing.  Anxiety can get me in a lot of different ways.  I’ll get worried about completing a distance and talk myself into hiking too much too early.  I managed to push that aside and really run by comfort.

When I got through the finish, Nathan walked up and said “you know you’re second female right?” I had no idea.  I thought he was joking. You never know who’s going to show up, or how things are going to fall.  I came out in 6:24, more than thrilled with my time.  I really ran that course, and am damn proud of it.  I’ve really struggled with how I feel about myself as a runner, and this race helped to instill a lot more confidence.

One thought on “Rockbridge Revenge 50k”