This has been a really hard report to write.  I’ve started over several times.  This wasn’t my day, it wasn’t my race.  There were a lot of race logistics that I found frustrating, like confusing course markings and aid stations without things that I anticipated being there (yes I read the list on the website).  That being said, it was the first year this race has been put on, and the course marking feedback was taken well.  There were even some things changed between the first and second loop that made it more clear. I’m not blaming the RD’s for my DNF, but I will speak to the course confusion.  I’m sure that this race will improve, and in reality, I was just having a bad race day.

I wasn’t feeling confident heading into this race.  It wasn’t anything in particular, I was just feeling off.  It took me longer than I had hoped to recover from Bandera, and I had been sick the week before.  I was still feeling pretty lethargic, but headed out hoping that everything would work itself out.

There were very few runners starting out.  The 40 milers started at 7:00 am, and I believe there were 29 registered.  It’s the first year for this race, and it was small.  The course is on ATV trails.  This means that there aren’t any switchbacks, just straight up and down with a lot of loose rock.  I knew going into this that there was a lot of elevation gain, but soon would find out how rough that it would be. 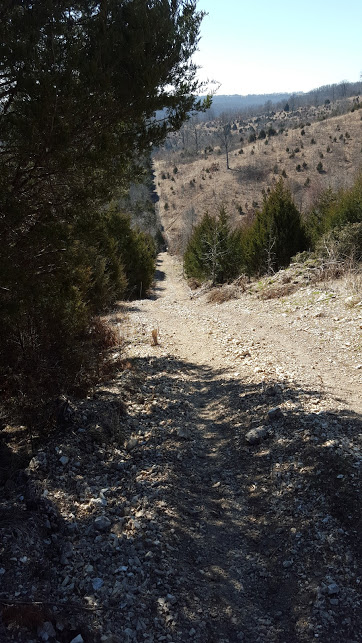 I was running with two people I knew, Jeff and Amy.  We saw a mile 1 market sign.  This is atypical for a trail race, and it would prove to be both helpful and frustrating. The first time we realized that we had done something wrong, we came to a mile 6 marker.  A Garmin is only so reliable on trails, but we were only a little over 3 miles in.  We started backtracking and found a several other runners that had done the same thing.  Throughout the day we realized how consistent of a problem this was as we met other people.  The course crossed over itself so much that when you were off course, you were never off the course.  You were just on another part of it, so you could go quite a ways without realizing it.

We backtracked until we found the turn we’d missed.  It was easy to do.  All of the markers were up high, and there were no markers that signified turns.  (This turn was one where volunteers went and clarified with more markings before loop two.)

We continued on and the hills started to grow.  My breathing was off all day and I could not seem to get my nutrition right.  My fingers were realty swollen and I wasn’t getting enough salt.  I kept finding myself getting much hungrier than I should.

These hills were no joke.  The most enjoyable part of my day was climbing these with Amy. Each time we’d start one of these monsters she’d proclaim “This is a long one,” followed by “This is a steep one.” It made them so much more enjoyable.

We missed another turn around mile, oh maybe 11ish and backtracked again, and we were pretty sure at mile 15.  Though it turns out that the mile 15 marker wasn’t out, so we probably really didn’t.   Either way, confusing.

We got back to start our second 20 mile loop at about the six hour mark.

I immediately was having a harder and harder time heading out.  The first section of the trail was the most runnable, and I was dragging more and more.  I was struggling a lot with my breathing at one point, still not really sure what was going on there.  I dropped back from Amy, but carried on.  I had enjoyed Amy’s company tremendously, but I wasn’t enjoying this run.  My mental game was way off.  I couldn’t keep my goals small enough.  I kept thinking about the course as a whole.   Really, I just wasn’t having fun.  This race wasn’t a goal race for me.  I had come to just have a good time and knock out some miles.  I wasn’t running well and I was just beating myself up.  I was questioning what finishing was going to make my running look like for the next few weeks, and I knew I would need to really recover from this, potentially screwing up my next race.  I had slowed so much that I was also questioning if finishing was going to make me feel proud, you know, at least I pushed through it.  I realized that it really wasn’t at this point.  I was just looking for an excuse to stop.

I came to the next aid station, AND IT WAS THE WRONG FREAKING AID STATION!  I had made another wrong turn.  There it was.  I threw my hands up in the air, “I’m done.”  It was like a huge weight had been lifted off of my chest.  I never thought a DNF could feel so good.

There were ATV’s coming by the aid stations pretty frequently, but I knew that I couldn’t be too far from the start due to how the course crossed over itself so much.  There was a 4 mile course that primarily ran some gravel roads, so I followed that course out.  I got back having covered about 27 miles.  It took EIGHT HOURS.  Speed is relative, but for me, that is not exactly typical.  Though I will say, those last couple of miles where I was simply headed back to the finish were glorious.  It crossed over a small portion of the larger loop and I had a very nice conversation with another trail runner.

I arrived at the finish, officially dropped, and found the beer. Old Chub Nitro Scotch Ale from Oscar Blues Brewery.  The second best choice I’d made all day.