I’ve been really looking forward to this race.  I signed up the day that registration opened.   As training moved forward I also signed up for an intimidating race in Colorado, the High Lonesome 100.  So now this race had become two things: an incredible adventure (in part because my husband was coming with me! Eeeekk!!!), and also a great test run to see how my training was going towards Colorado.

My husband Nathan and I flew into Las Vegas on Thursday just to have an extra night to hang out together (it was the first time we’d traveled together without our son).  We spent the night, had a great time, and drove to Bryce the next morning with a detour through Zion.

We stayed at the Bryce Canyon Pines motel. It was maybe 10 minutes from the start and had a decent restaurant with a great view.  A lot of us came in from Kansas City so we managed to all have dinner together the night before.

The 50M has an early start.  6 am doesn’t seem too bad, but this race is a point to point.  Meaning, I got up a little around 3:20 so I could be dressed, make breakfast and coffee, and be at the lot to catch a shuttle to drive us to the start at 4:30.   The 50M start was really well put together.  I brought breakfast on the shuttle so that I got some nutrition in closer to race start.   They’d brought up trash cana, had plenty of porta potties, and a place to drop any extra clothing you’d worn to have it brought back to the finish.  We started up around 8500ft and began climbing.

I placed myself kind of front mid pack which worked out perfectly.  We had about half a mile of dirt road to spread out before hitting single track.  I was far enough forward to be able to run, but far enough back in the pack to start easy.  We were up in these beautiful high alpines with the sun just starting to peek out.  The beginning few miles moved from single track to Forrest service road and climbed and climbed and climbed until we got up to around 9500ft.

It was amazing.  It was warm, but not hot yet and I was able to comfortably power hike at a pretty good clip.  With the switchbacks, you could look back and see so many runners starting to make their way up.  After a bit we crested the top of the climb and had an easy jog down to the mile 6 aid station.  It was early and I felt great, so I yelled out my number and just ran on by.

This is one of this what comes up must go down situations.  We immediately ran down for miles to get back to around 8500.  I stayed conservative, picking up pace, but making sure not to trash my quads and knees (44 more miles + CO practice)

I got to the mile mile 11 aid station and breezed through with a quick bite (I’d brought a lot of my own nutrition in my pack that I’d been picking at.). And moved forward again.  It was up and down and up and down.  Each time we climbed there were incredible views of the ridge, and each time we dropped there were amazing meadows and flowers.  It was completely exposed, but I was doing ok with the heat (a major victory for me). 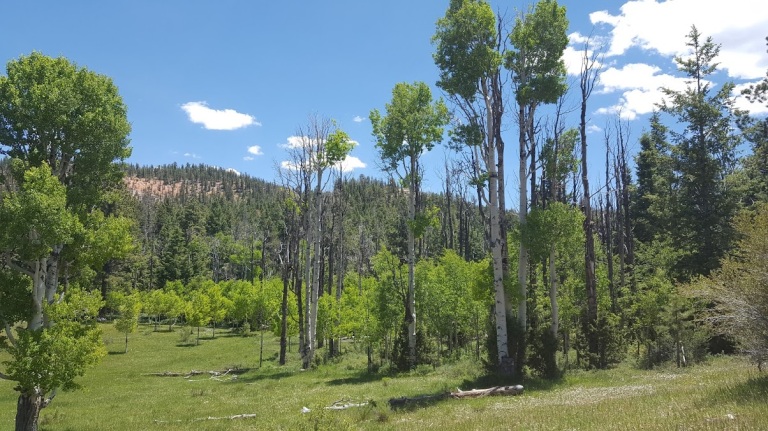 I ran with a guy named Kirk of the first half of the race.  Everything was best case scenario as far as how my body felt.  I climbed up and down and stopped for photos occasionally, trying to make sure to take in some of the incredible views.  It was so beautiful.

When I hit the mile 24 aid station I went in knowing I needed a few things but planning to be quick.  No luck.  There was only one water jug so I waited in line for a while to fill up.  I popped inside and managed to find a soda, there was lots of fruit I wanted, but none of it was sliced so that took a moment as well.  I got out pretty quickly all things considered, and started a steep climb.

At this point in the day it was starting to get pretty hot.  There were some beautiful meadow sections and the trees were disappearing as more red rock and sand appeared.  I do not do well in heat is perhaps an understatement.  So at this point I started to question whether or not I was having fun……and then I started to hear water!!!  After a bit a stream appeared, so I did the most logical thing and rolled around in it like a dog.  It was glorious, so cold and clear.  I was a new woman, and yes, I was having fun.

The aid stations were each about 9 miles apart, and with the heat I began to just focus aid station to aid station, and enjoy the scenery.  I could see the next aid station, but getting there took us down a steep sand bank.  I’m definitely getting better at downhill running, but I looked at this quizzicaly.  It was steep with a drop of.  I figured, just run it, so I took a couple of steps, fell right on my butt, and slid down.  Well that worked.  I bebopped in at mile 33, found my drop bag, and got myself together.  I put ice everywhere manageable, stocked up on what I needed and took off.  At this point I’d been alone for a bit, and as I went out I saw Kirk who I’d run so much of my morning with come in.

As per this course, I left the station and started a steep climb.  I made it about half a mile and SNOT! I forgot to grab my headlamp.  So I stood there processing.  It was unlikely I was going to need it, but now it was hot and I was struggling more because of it.

I turned around to see a woman climbing behind me and asked her if she thought we’d need them.  I voted to ignore it because I just couldn’t quite bring myself to repeat that climb.  As I was turning around I heard the same woman holler that she was turning around anyway.  That climb was defeating her.  Well that’s a silly reason to stop, so I talked her out of it and stuck with her through the climb.  She was also from CA.  Her name was Julie, and after we got through that big push we were off for the next stretch.

The sun was intense and it just got hotter and hotter.  We came across another stream as we ran through more and more red, and stopped for a bit to cool off.  Rejuvenated I popped up ready to go.  The sun though was still pounding and I was struggling with it, slowing down, but my legs were still good.

I just focused on getting to the last aid station.  I could get what I needed, take two steps out and I’d be headed to the finish.  No need to think about mileage.  We got to the last aid stop and I went in knowing what I needed to do.  Solid food wasn’t sitting well so I wanted some liquid calories, a ginger ale and some broth.  I would hang out and cool down and be good to go.  No such luck.  No more soda of any kind, no broths or soups left either.  So now staying here was just going to continue to suck energy. I ate what I could stomach and left.  I knew I would finish, but now this stretch was going to be uglier than I’d hoped.

Again, we immediately started to climb. The last nine miles were essentially half up half down.  Julie and I decided to stick together.  This part of the course was ridiculously pretty.  We were officially in the hoodoos, the beautiful red rock structures unique to Bryce.  I made it over the big climb and was so excited to push through to the end, but I was feeling bad.  My stomach just wasn’t having it.  With about four miles left I finally threw up.  Not ideal.  My stomach was mad.  I shuffled on trying to do anything to feel better, and there just wasn’t much to do.  It was just, get to the finish.  I told Julie to go on, but she refused because she was a trail angel.  I stuck as close to her as I could, interspersing hiking and walking.  I could power hike well still, but the jostling of my stomach when I ran was awful.  About two miles left I threw up again.  Like, on my hands and knees wretching.  Fortunately I am also terrible at throwing up, so I didn’t lose all of my water, but it’s not the most graceful position to be in.  Again, I’m telling Julie to just go on, but she refused because, trail angel. 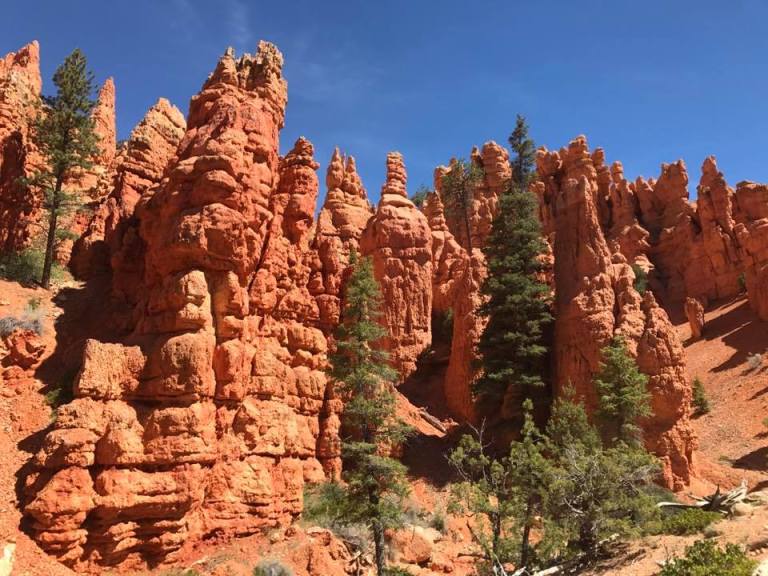 That last stretch was intense in part because of what the other runners looked like.  The people running around me were all ok, but we saw a lot of people shade hopping as best they could, search and rescue came in groups, and medical was giving someone an iv on the trail.  I’d never experienced anything like that before.  We checked in on anyone who was sitting, but otherwise pushed forward.

We rounded a corner and there was a volunteer saying we just had one mile left, and there were water jugs! I put some cold water on my neck and looked where we were headed.  It was a dirt road, all downhill.  We hiked and ran in intervals so I didn’t wretch again, and ran through to the finish.  My husband and friends were there! I honestly didn’t expect this because they’d all run earlier and traffic getting to the finish was limited.  It was perfect.

I was done.  That was a hard course with hot weather, but it was so beautiful and I had a lot of fun.  The views were more than I could have asked for.  As per usual, I learned a lot and will move forward with good knowledge.

• I need to assume aid stations will run out of things, pack boullion cubes and my own ginger ale.

• My training is going well, I was happy with my climbing ability, and I never blew up on the downs.  Quads and knees stayed in great shape.

• I’m getting better at managing the heat.  Though I wish I’d had a handheld in my drop bag for the hotter sections, so I could have extra water just for my head.

• I’m also getting better at problem solving.  Earlier in my running life I may not have finished this one.

• The photos will never fully do the views justice, but they’re still totally worth enjoying.

• My coach is awesome and I’ll keep doing what she says.

• My husband is amazing and I hope to destination race with him again soon.

* If you are planning on this race, I highly recommend booking a room immediately, if not before registration even opens.

** If you’re interested in this race and want more specific information/opinions on logistics I’m happy to share and answer questions.

*** Though I had a great time, the logistical issues were pretty significant (more so than I emphasized.) I would want to hear and see some changes from that company before running one of their races again. (It’s a new company, different than 2016)