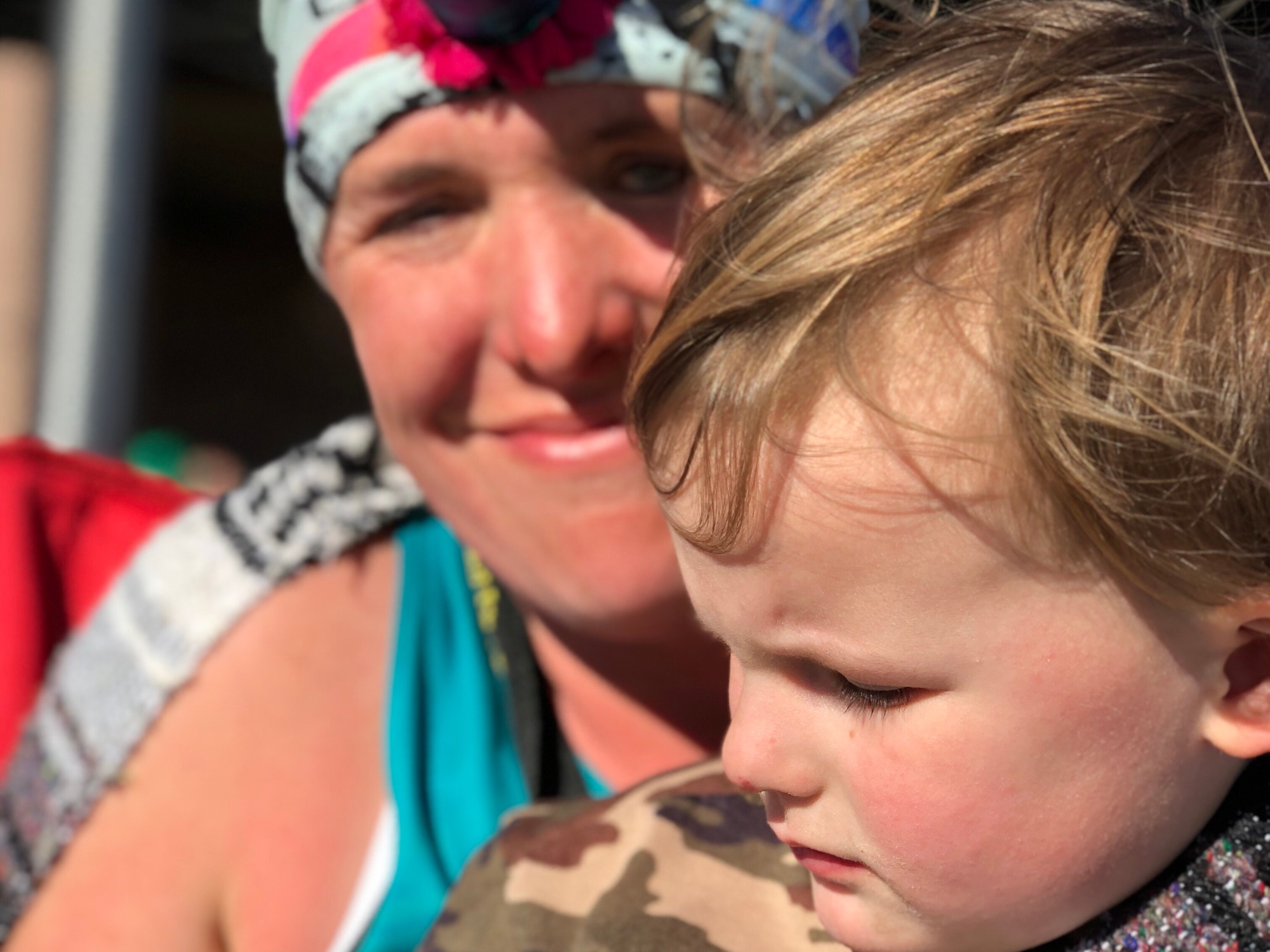 This was my first timed race. It’s a very different style of racing than running towards a distance.  Timed events like this typically take place on a relatively small loop that you do as many times as you can for a set amount of time.  In this case, a 2.5 mile loop for 48 hours.

This style of racing has appealed to me and I’d been looking forward to running this.  It feels pressure free.  You can’t screw it up.  You do one lap and you have success.   50 laps, success.  There’s no such thing as a DNF.  I tend to get a little stressed with course cutoff times no matter how far away I am from them.  They don’t exist here.  I wasn’t sure if I’d get bored running the same loop, but I was excited about how social this type of event is.

My main goal going in was to have fun.  I wanted to meet people and enjoy the atmosphere.  I wanted to focus on enjoyment, so I didn’t talk about mileage goals much (though I had them of course). I also wanted to really use the 48 hours.  I wanted to sleep as little as possible and stay on course through hour 48.

The start of race day was pretty mellow. The start was at 8am and our hotel was two miles away, so I got plenty of sleep. There’s an area set aside on the course for runners to set up whatever they want.  Some people had tents and people camping out with loads of gear.  Some people had everything in the trunk of their car.  I laid out a small tarp with all of my things.  I had food that typically sits well when solid food doesn’t do well, extra clothes, a cooler of ice, and all the typical anti chafing, sunscreen, socks, extra shoes types of things you’d have at a 100 miler.  The nice thing here is that I didn’t have to figure out where to drop what. I just stuck everything in a pile and wandered over towards the start.

They make a fun production of everything.  There are showgirls each morning and Elvis comes out.  Throughout the night they play movies at the main aid area.   One of the RD’s was dressed in a Las Vegas themed suit with a fedora.  There’s a pre-race meeting and then everyone lines up and before you know it, we’re running. 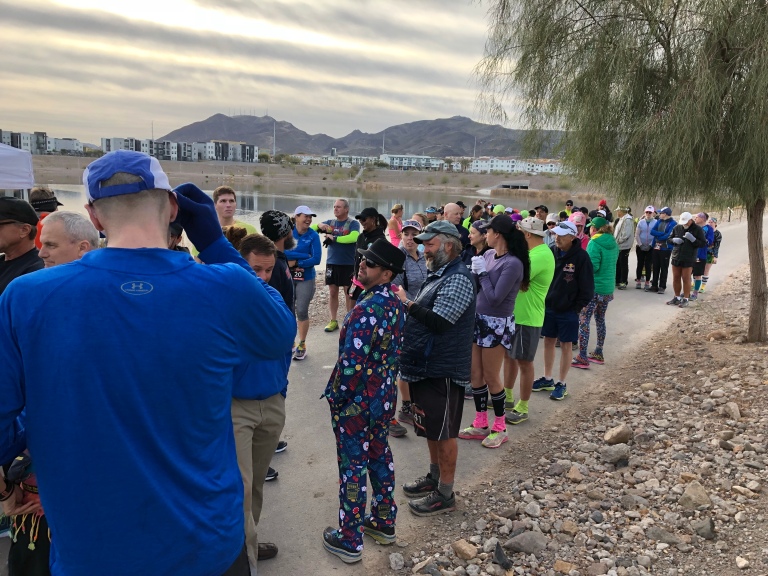 My things were laid out at around the mile point of the 2.5.  As I ran past the 1st time my hubby and Jules (small human) were there.  As I ran up to sneak one last kiss my son look at me all excited “You done Mom!!”  Umm, nope.  Not quite yet. 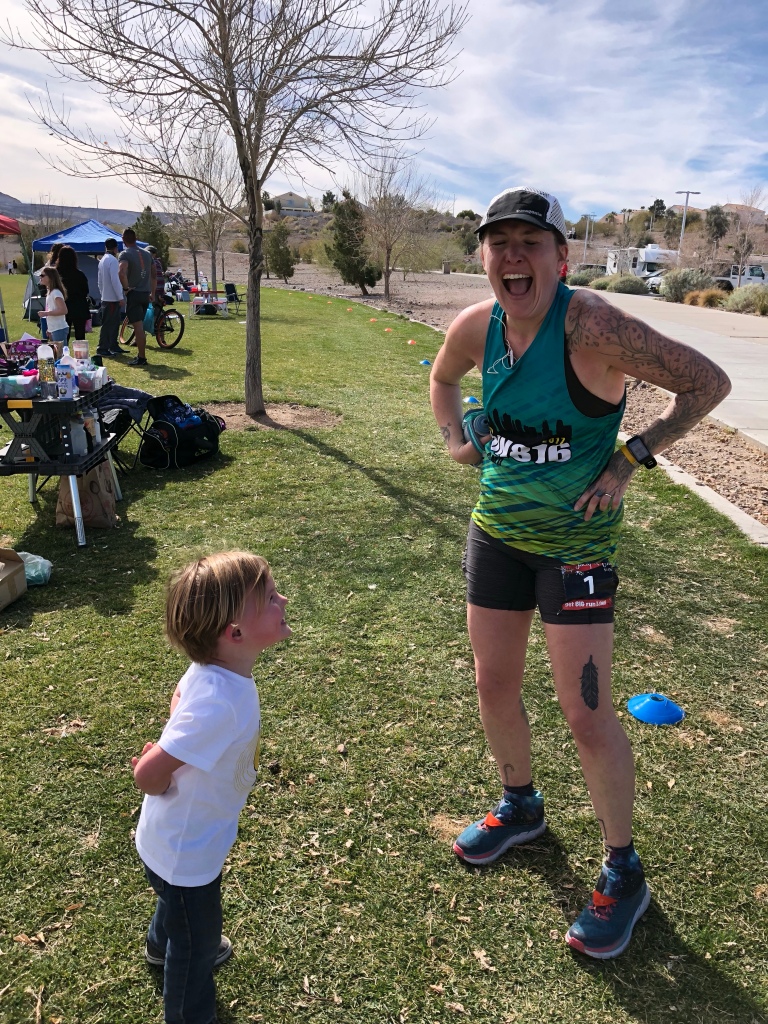 I’d immediately met a few people and already felt relaxed.  I knew one guy through social media already.  I met another gentleman because he was wearing a Hitchcock 100 race hoodie, and I met an amazing women from Seattle because she was wearing a Trail Nerds hat (our local race company).  She is a high school principal, loves these types of races, and became someone that I talked with a lot over the course of the race.

Outside of that, this type race is what it sounds like, you run in circles.  I tried to stay conservative with my pace and incorporate walking early.   I’d run 10 miles, then walk a mile.  I pretty much did this for the first 50 miles, with a little random walking here and there.  My left quad started bothering my early, but I just kept stopping to foam roll it and rub in some arnica until it eventually worked itself out.

Over the first night I spent some miles with a guy named Andy who said that “100 milers are checkers, and this is more like chess.”  I get that.  You’re out there long enough that you have to fix things as soon as they come up.  You have to pace yourself differently, it’s all problem solving.

The nice thing about the small loop was that I hit my tarp at 1 mile and aid at 2.5.  That meant I could always fix things immediately.  I’m not someone who tends to get stuck so this was great for me because I’d just grab what I need and leave.  I wouldn’t camp out.  If I started to chafe, I’d put something on.  If the soles of my feet started to really hurt, I’d put on a different brand of shoe.  if I started to get too hot I’d grab ice.  If I needed food, I’d get it immediately.  I ate nearly every 1/2 hour the entire time, even if it was just a slice of orange, I’d eat something as I passed the aid station.  The first day was chatty and light.   Nathan came by with Jules and they got in a mile with me.  It was way too much fun for the mileage I was at.  Jules ran and giggled.  I was all over the place with him and it really stretched out my lateral muscles.  It was just what I needed.

Being in February, there’s a lot of darkness.  A lot.  The sun goes down early and you’re in it for a long time.  I knew that it was going to get cold, but I wasn’t prepared for how much the drastic difference in temperature was going to get to me.  It got colder than expected, dropping into the 30’s and it’s right by the water with no humidity.  I typically do really well in the cold, but the quick change freaked my body out.  I ended up in my singlet, a long sleeved tech shirt, a light hoodie, and my puffy coat.  I threw some sweatpants over my shorts.  I got too cold and started shaking so hard that I was spilling the coffee I was trying to drink.  I knew I needed to just move to get warmed back up so I walked a loop, gradually picking up the pace, got a cup of coffee I could hold onto when I get back, and then was able to get running again.  I was a lot slower overnight than I usually am, but I stayed on my feet.  I started really focusing on the hours until sunrise, and eventually it came.

The sun peeked out and reflected on the lake.  The birds all started coming back out.  I felt completely rejuvenated.  100 miles was getting closer and closer.  At 8am the next races were starting (24hr, 12hr, 6hr, 100 miler, and marathon).  The showgirls and Elvis were back.  I hoped that this was going to give me a boost and it did.   I hit 100 miles somewhere in hour 24.  I was trying not to push that too fast so that I’d have enough left for the 2nd half of the race and am comfortable with how that all felt. There was so much fresh energy and I was back on.  I started running really well again.  I was chatting with some people who were there for different distances and got back into a groove.  I had a solid day of running and felt great.

It got dark early again and Nathan came out with me after he got Jules to sleep (a friend had been hanging out in Vegas with Nathan.). He was going to run a lap or two with me before I tried to get a little sleep.  This is where I made my biggest mistake.  I was at 145 miles, and really wanted to hit 150 before laying down.  I was practically sleep walking.  I kept dropping my head and shutting my eyes.  Nathan talked me through that loop to 150.  I should have laid down before then.  He walked me into the warming tent and he left to go back to the hotel.  At 12:30 in the morning I was shivering hard even in the tent with all of my warm clothes on.  I knew what I needed but I was so tired that I wasn’t problem solving well.  I texted Nathan and without hesitation he came back.  He got me in the car while I was sobbing because I hate asking for help.  I knew I would waste way too much time fixing this on my own.  I am so grateful for how supportive he is.  He turned the heat all the way up and let me shut my eyes for 15 minutes.  Then he kicked me back onto the course.  I love him. 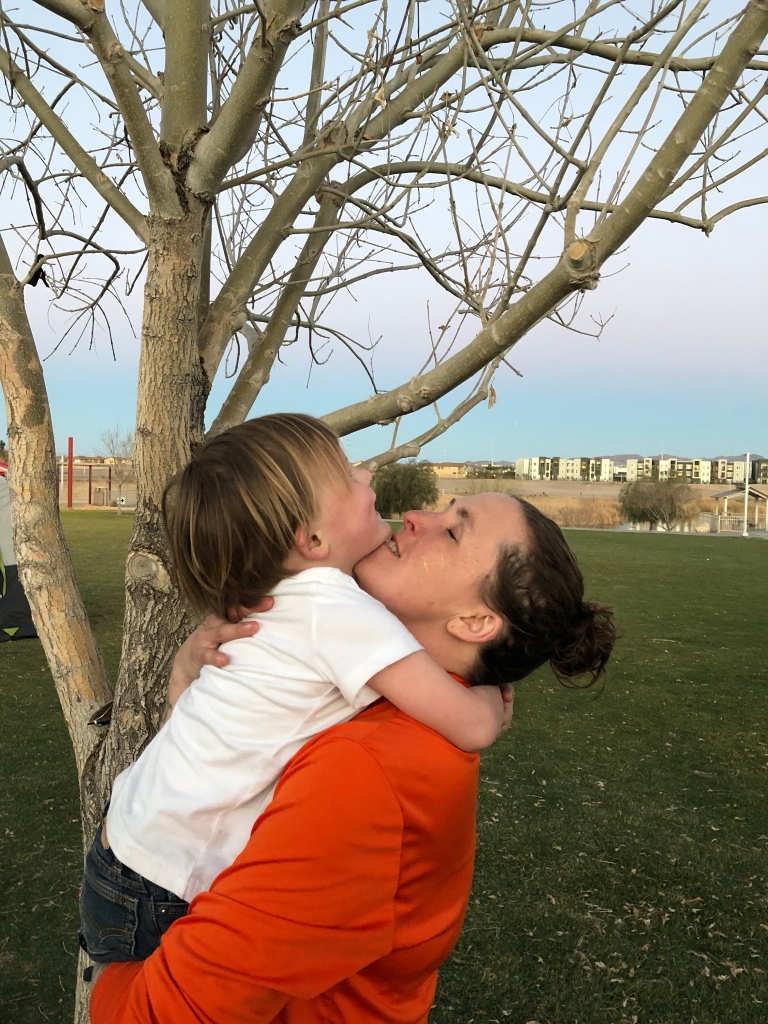 I wandered back over to get a coffee on my way out and Ann Trason was looking for someone to join her on a lap.  She was dressed as a unicorn.  This was perfect.  We’d talked a bit earlier and I needed some company too.  It got my legs going again, and after we got through it I was able to get back into a groove.  I learned from my mistake.  Every time I would start nodding off I’d lay down, just for 5-15 minutes. I’d head into the warming tent or just lay on my tarp.  I’d get back up and head back out, focusing on the need to keep moving forward and that eventually the sun would come up.  I hit mile 160 with time left and started setting a new goal.  I wanted 175, but focused on 170.  I wasn’t sure how much I could push.  I was so far back from 1st place that I couldn’t catch her, though I’d been trying.  We ended up spending some loops together late into the night.  She was the kindest person and I’m so glad I got to run with her.   At this point it was miles for the sake of more miles.

The sun did eventually come up and I was able to pick up the pace again.  I ran well for a while Sunday morning.  Time was coming to an end and I wanted to use all of it.  You’re allowed a partial lap at the end.  I git 175 miles and had a little under 20 minutes left.  I had to talk myself into it, but that was the point of being out there, using the time.  They give you a braclet to drop in a bucket with your number.  Buckets are spread out every half mile on the course.  I hit the mile point and a guy was running with me.  “We have 6 minutes.”  Well I suppose we have to keep going.  We hit the next half mile marker and dropped in our bracelets.  That was it.  I walked back over to start finish and heard the horn sound signifying that time was up.  My family was waiting.  I went to see Jules and he just looked up at me and said “Mom not done.”  I burst into a huge laugh. 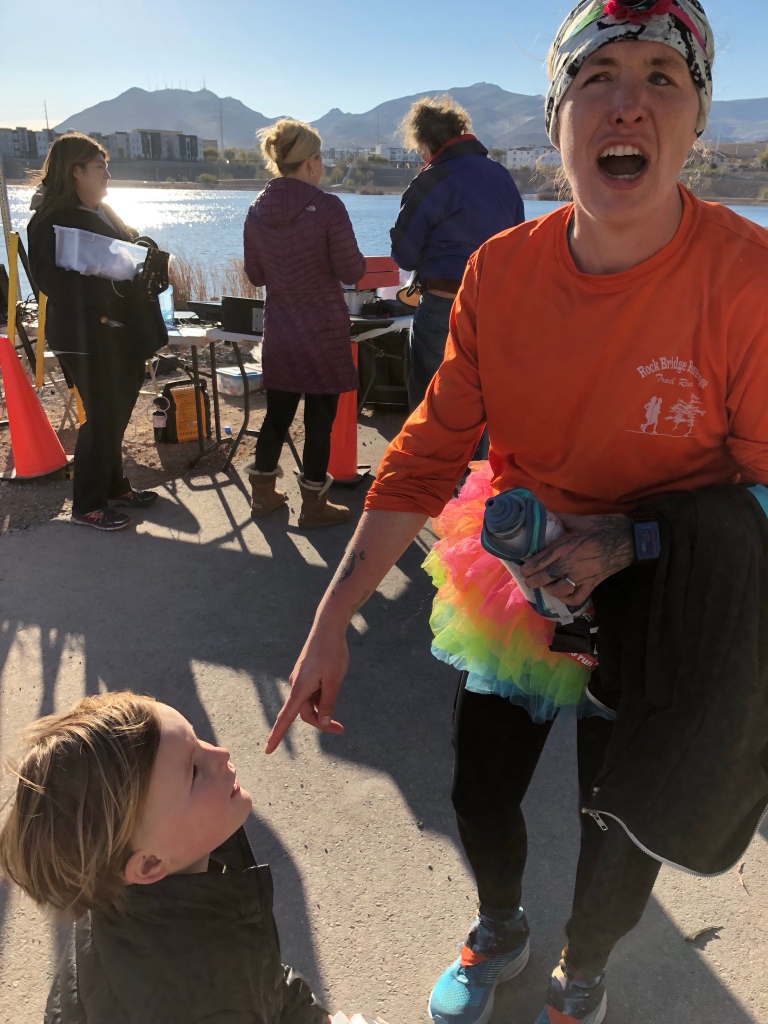 I loved that race.  It’s not the only type of racing that I want to do, but I will absolutely do it again.  I feel like it plays to my strengths, and I’m excited to modify my training for the next one.  I ended up with 176.5 miles, 2nd female, and 4th overall.  Those are fantasy miles.  I pushed past what I knew I could and feel good.  I ran with people I knew about and admired, and strangers that became fast friends. I ran smart and fixed problems when they arose.  I am 5 days out and feel good.  I was sore but didn’t hurt anything; and I went to the park to play with my kid Monday after our plane landed.  I’m starting to get excited to go running again, though I’m going to give a full week of recovery first and then see.  For now, I’m going to stay up on this little cloud as long as I can. 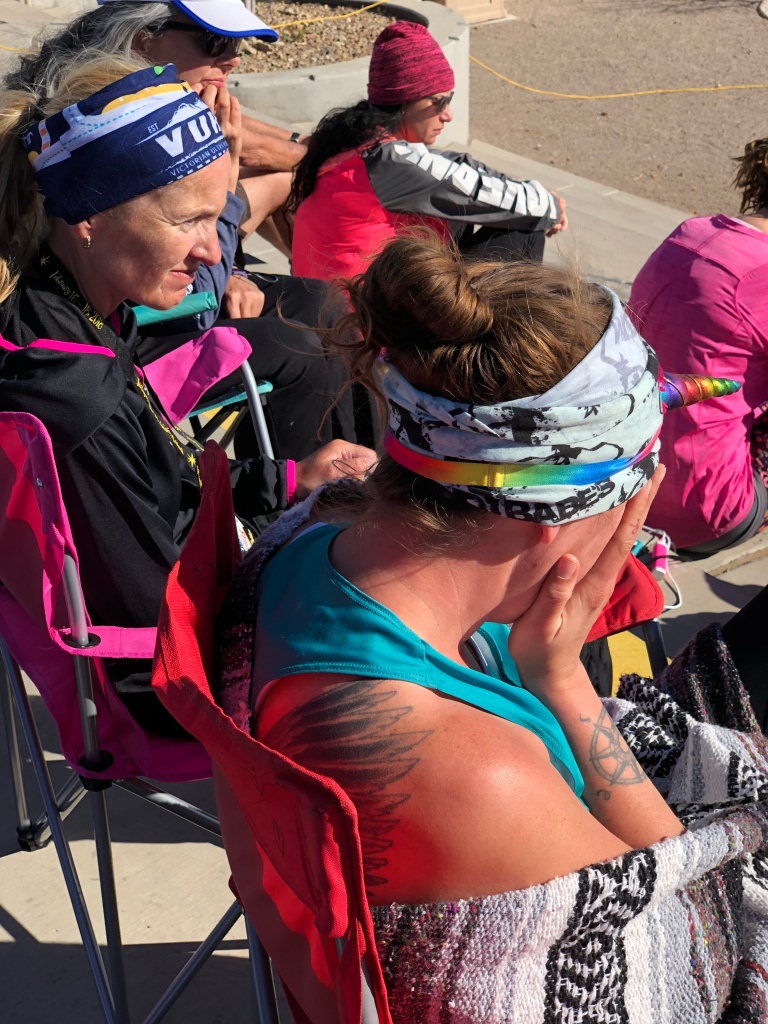 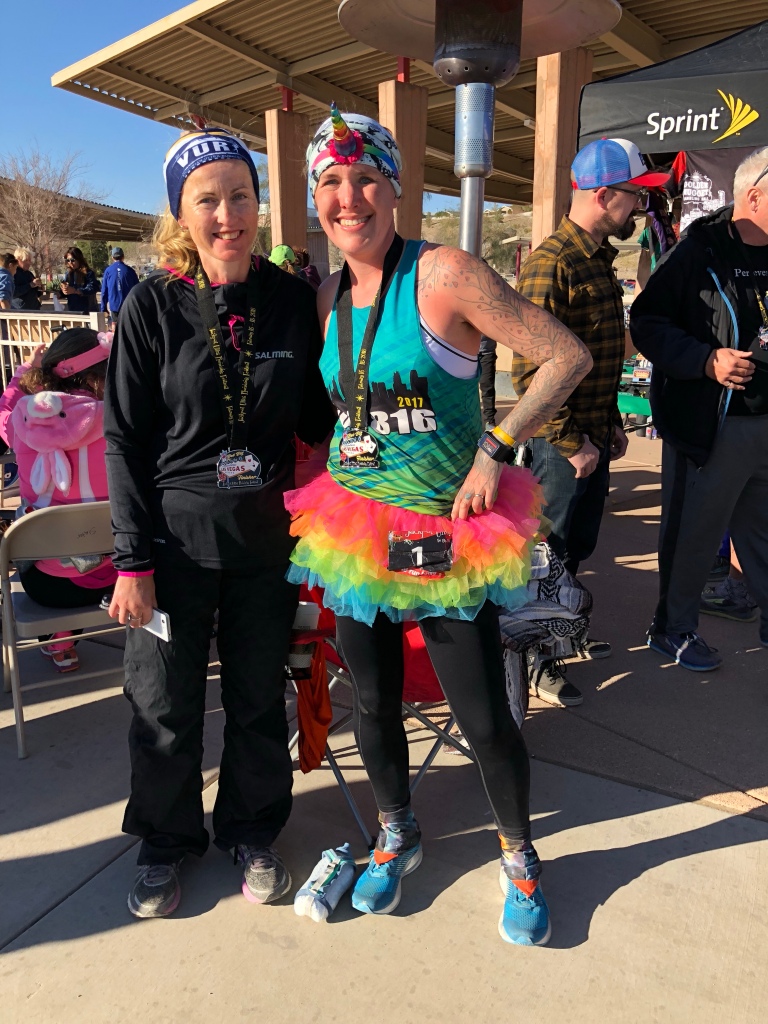 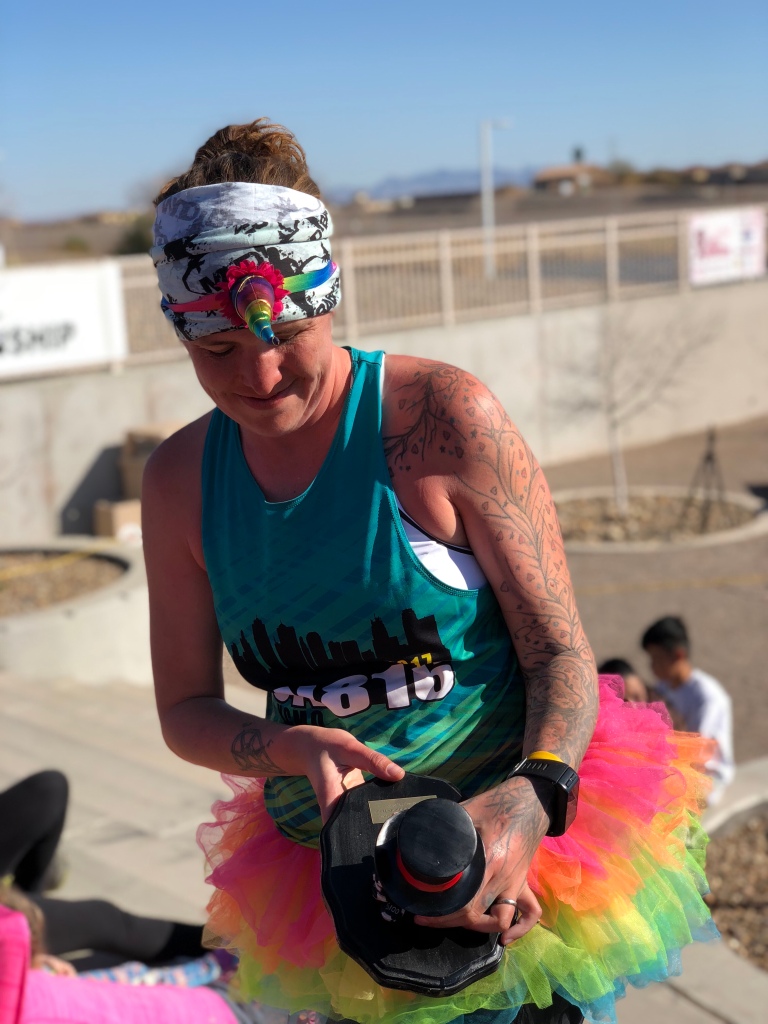